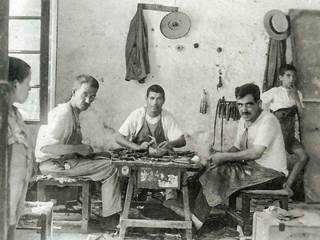 Simple, comfortable and practical. Those are three qualities that come to mind when we think of Menorcan Avarcas. Right? And I would also add style, success and trend: with them, you can set a style, they are a success on any occasion and are a must that we all have in our summer wardrobe to set the trend.

However, do you know where the Menorcan avarcas come from? And you will tell me, of course, they are from Menorca! But I am referring to their origin, to the base that gave birth to your favorite sandals. Would you like to know it? Well, I will tell you!

Menorca has been a conquered land on many occasions. The wonderful natural harbor of Mahon was an object of desire for those who wanted to expand their empires. In each of their stays, their conquerors left some “memory”, “costume” or “vestige” that the Menorcans transformed and adapted to their needs and lifestyle. This is also the case of the Menorcan avarcas. As I mentioned, in the post about the name of the avarca, the term “abarca” is not exclusive to Menorca, but we can find it in other parts of the Spanish and Mediterranean geography, since it has its origins in the Roman Empire.

Nevertheless, it seems that their arrival on Menorca was not with them, but with the Catalan-Aragonite crown, who with their conquest in the 13th century inspired the Menorcan farmers, especially those in the center of the island, where the Mibo factory of Menorcan avarcas is located, to create flexible and resistant footwear that would allow them to work the land with their feet protected from the cold, stones and stubble. The cold? Yes, as you read it. The farmers of Menorca used to put straw inside their primitive avarcas to protect them from the humidity and keep their feet warm and free of chilblains that would prevent them from continuing to work.

Originally, the farmers made their Menorcan avarcas, sitting in front of the fire on the cold nights from San Miguel to Christmas (from September to December). I love to imagine them, telling folk tales and making or fixing their avarcas while they also did other jobs, such as making esparto grass utensils, fixing chairs with rope (cordar cadires de Bova), or making palm brooms. There were humble times and the avarcas were sometimes even part of the wages of the farmworkers, “missatges”, day laborers who helped the farmer and his family.

The initial raw material was the leather of the animals (cows, pigs…) from their “llocs”, the typical Minorcan farms. Who has not dreamed of living in one of them! They used this leather to make all the avarca, from the sole to the fastening straps, always choosing the thickest and greasiest parts for better protection. With the arrival of the rubber wheels came the revolution: they changed the leather of the soles for the tread of the tires and the straps for rubber strips taken from the sides of the tires, thus giving even more resistance and grip to their avarcas.

They were so comfortable and resistant that the Menorcan bourgeoisie began to use them. Never mind, these primitive avarcas were too coarse (that means, they were not beautiful!) for the fine feet of the ladies, so around 1955, they asked a workshop in the center of the island, of expert shoemakers, to make them a more refined model. Such was their success among the “señores” (the island’s bourgeoisie and nobility) that even dances were held in which they only shoes allowed were Menorcan avarcas.

Since then, the main customer of the Menorcan avarca has always been the tourist, and its success was such that since 1965 there were several attempts to patent it, against which local manufacturers fought, thanks to PIME Menorca, until they achieved, in 2000, some basic regulation rules (Avarca product of Menorca) from the Island Council, which served as the basis for the latter, together with the Association of Footwear Manufacturers of Menorca, to approve in 2010 the official regulations of the Avarca of Menorca guarantee brand, to cede its commercial use to companies on the island that request it and comply with the regulations.

The Avarca of Menorca brand informs consumers about the geographical indications of production and distinguishes avarcas on the market that meet the technical requirements for quality of material and manufacture – a must!

How interesting! Did you already know this story? I have loved researching it, now I like wearing my Avarcas Mibo even more, knowing that is the official manufacturer of the Avarca of Menorca, a distinction that its avarcas wear with pride throughout the five continents, promoting the island of Menorca through its most representative symbol. There is nothing better than the union of tradition and innovation in a product that comes from the heart.

I use them every day and you?

Do you want to receive offers and discount codes from Mibo in your e-mail?

Enter your e-mail so that we can send you the instructions to set your password:

It seems that you visit us from .

You can always change this again whenever you want from the currency selector at the bottom of the page.